Menu
Leadership/The President´s Blog/Does Prayer have an affect, or is it only for our Personal Purification?

Does Prayer have an affect, or is it only for our Personal Purification?

The great city of Paris, France has been rocked by terrorist attacks again, this time killing more than 130 people, randomly. It seems to be connected to muslim extremists. Now is the time for concerted prayer for Europe! 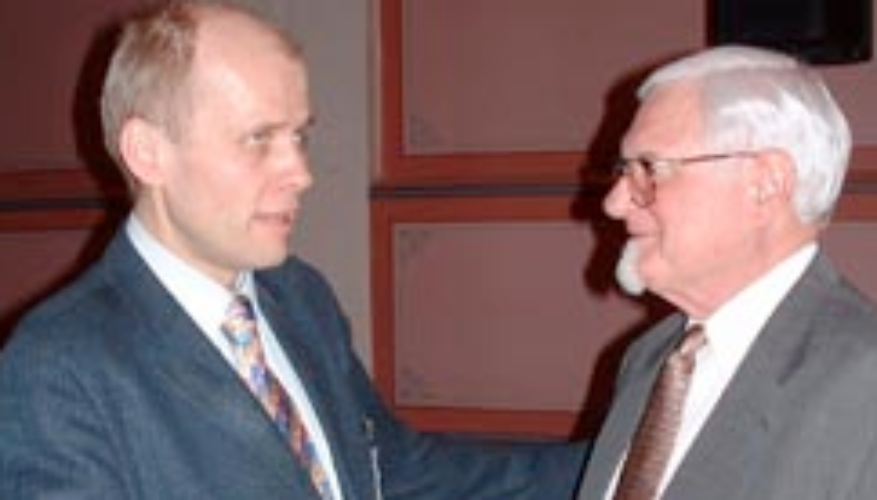 With Peter Wagner when he taught in Oslo in 2003

I have been involved in significant prayer initiatives for Europe, but I have been stifled by leaders who have said that «it is good to pray, but mostly it does not change much - except your personal purification» (direct quote).

As we are entering into a new era of intercessory prayer in Europe, we need to know that prayer actually works. Prayer movements that align with people who don´t believe in the power of prayer, will be weak.

Dr. C. Peter Wagner has deeply impacted me since 1981, and in my involvement with main leaders of the apostolic movement, I have discovered that several of them reject Wagner´s teaching and practice of prayer. Why? The division is rooted in theology.

Wagner is a proponent of «Open Theology». As European Coalition of Apostolic Leaders (ECAL), we need to know this. Otherwise our resolve and efficiency in prayer can easily be weakened. This is an absolute necessity!

Instead of giving my own presentation of Open Theology, I will let Wagner himself speak, quoted from his book (2004) «Changing Church» (pp. 153–156). Ventura, CA: Regal:

Over the past few years, a group of credible, respected theologians have proposed a way of understanding the nature of God that goes deeper than the five TULIP points, questioning the classical Calvinist view of God’s foreknowledge. This is called open theology, or open theism, and it is espoused by such thinkers and authors as Greg Boyd, Clark Pinnock, John Sanders and others. Their arguments, in my opinion, might stop short of dealing a coup de grace to classical Calvinism, but at the very least they make it untenable to locate TULIP in or near the absolutes circle.

What does open theology teach? Based on a quantity of biblical evidence, it teaches that the sovereign God (God’s sovereignty is not the issue) has so designed the world and His relationship to His creation that He has intentionally left many things up to decisions that human beings make, rather than predetermining them or foreknowing them. In other words, much of what human beings do really matters in determining history.

Does God Ever Change His Mind?

The key issue of open theology is reflected in the subtitle of Greg Boyd’s excellent book, God of the Possible: Does God Ever Change His Mind? Boyd thinks that God does change His mind, and I happen to agree with him. I know that some will criticize me for espousing open theology, but in doing so I am not attempting to argue that it is a theological absolute and that others should agree with me. I am simply suggesting that open theology is a deduction based on biblical evidence concerning the nature of God, and that it is at least as reasonable as the deductions expressed in classical Calvinism or Arminianism for that matter.

Open theology is new to most, but I would expect that some who have always thought that God’s foreknowledge of all things might be a theological absolute could conceive at least a hint of why I, along with others, think that open theology is a reasonable theological deduction. It seems clear, to take one example, that God actually changed His mind when Moses came down off the mountain and found the people worshiping a golden calf. God said, “I’m so angry with [these people] I am going to destroy them” (Exod. 32:10, GOD’S WORD). Moses replied, “Don’t be so angry. Reconsider your decision to bring disaster to your people” (Exod. 32:12, GOD’S WORD). The upshot? “So the LORD reconsidered his threat to destroy his people” (Exod. 32:14, GOD’S WORD).

The Scriptures are peppered with similar incidents. My Calvinistic professors told me that we must interpret such passages as anthropomorphisms: expressions of the nature of God in terms that humans can understand but which should not be taken literally. However, to the contrary, open theology recommends that we take such passages literally—and why not?

Consider, for example, this Scripture in which God discusses His own nature:

Does God ever change His mind? If we take these Scriptures at face value, it is reasonable to think that, at least on occasion, He does. Consider Jonah’s going to Nineveh. God said through Jonah: “In forty days Nineveh will be destroyed” (Jon. 3:4, GOD’S WORD). The king led his people in repentance. “God saw what they did. He saw that they turned from their wicked ways. So God reconsidered his threat to destroy them, and he didn’t do it” (Jon. 3:10, GOD’S WORD).

Does Prayer Make a Difference?

What difference does having open theology make? In the years that I have spent in helping to lead the global prayer movement, I have found that most intercessors and prophets assume open theology. They may not use the term and they may not have read Greg Boyd’s book, but they believe deep down that their prayers really have an effect on God’s decisions in certain circumstances. For example, since it is clear that God is not willing that any should perish (see 2 Pet. 3:9), they pray for the salvation of the lost. Why? Because they believe that as a direct result of their prayers, some will be saved who otherwise would not. They would agree with Richard Foster, who says, “We are working with God to determine the future. Certain things will happen in history if we pray rightly.”

I love this quote from John Sanders:

Our prayers can have an effect on God’s plans. It makes no sense to say God grieves, changes his mind, and is influenced by our prayers, and also claim that God tightly controls everything so that everything that occurs is what God desired to happen!

Not everyone agrees that open theology should be regarded as simply another valid theological deduction. A case in point would be the Evangelical Theological Society (ETS), made up of several hundred professional theologians from traditional evangelical denominations. Many of them are not quite ready for the lighter doctrinal load accompanying the Second Apostolic Age, particularly in the area of open theology. In their November 2003 annual meeting, for example, a concerted effort was made by a number of theologians to expel both Clark Pinnock and John Sanders from ETS because of their open theology. In Sanders’s case, the vote to dismiss him failed by only a slight margin.